THE 27th YOUTH FESTIVAL IN MEDJUGORJE 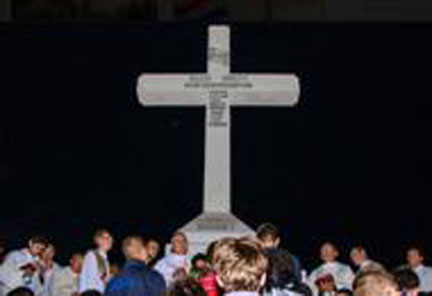 The 27th Youth Festival that began on August 1, 2016, was completed on Saturday, August 6, on the Feast of Transfiguration of Our Lord, with Holy Mass of Thanksgiving at 5 am, celebrated by Fr. Marinko Sakota, Medjugorje parish priest. The theme of this year’s prayer meeting was “Be merciful”, and dozens of thousands of young people from 69 countries came to Medjugorje. The daily programme began with morning Holy Mass at 9 am, and was continued with catechesis, testimonies, music and Christian life lectures.

After midday recess, the programme continued at 4 pm with more testimonies and then, various representatives of the youth participated in the prayer of the Rosary led by Fr. Karlo Lovrić, Fr. Emanuel Letica and Fr. Petar Jukić. Holy Mass was the central part of each day. Fr. Miljenko Steko, the Provincial of Herzegovinian Franciscan Province, celebrated the opening Holy Mass, while the other celebrants were Fr. Damir Stojić, Fr. Ivan Penavić, Fr. Marijan Štingl, Fr. Petar Komljenović, while homilies were given by Fr. Ike Mandurić, Fr. Ciril Čuš and Fr. Antonio Šakota. The largest number of priests were on Wednesday – 446 of them.

On Wednesday, August 3, the procession with the Statue of Our Lady, just like the last year, was held around the altar in the shape of the heart. Members of Cenacolo community gave their spectacle “Credo” on Thursday night after the evening prayer programme. Many priests from all of the continents were at disposal to the youth for the sacrament of reconciliation all the time during the Festival. All of the events were more special thanks to the singing and music of 90 members of the International Choir and Orchestra, conducted by prof. Damir Bunoza. The Festival was simultaneously translated into 17 languages and the programme was live streamed on many stations and web portals.

Fr. Marinko Sakota, in his interview for radio station Mir Medjugorje, at the end of this Festival said: Young people are thrilled, one can see that on their faces, joy is evident as well as prayer and music in them. I am overjoyed because of all of this, because of all amazing testimonies, it was a real spiritual retreat. Many young people said this was the best Festival ever for them.