MY HEART WILL TRIUMPH, An Autobiography by Mirjana Soldo 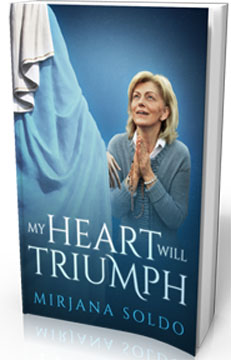 Mirjana Soldo was only 16 years old when she and five other children saw a mysterious young woman on a remote hillside in the village of Medjugorje, then part of Yugoslavia. The woman—who possessed a beauty and grace that seemed to come from beyond—identified herself as the Virgin Mary.

The apparitions that began on the afternoon of June 24, 1981 would dramatically change Mirjana’s life and the lives of countless people around the world. Her claims, however, contradicted the atheistic ideologies of the Communist government and Mirjana was deemed “an enemy of the state.” They persecuted her, but she never denied what she saw.

Amazingly, the apparitions have continued for over 35 years. Millions of people travel to Medjugorje every year in search of answers to life’s biggest questions. The messages given by Mary are a call for mankind to return to God. And, according to Mirjana, the Virgin entrusted her with ten secrets that foretell the future of the world—secrets that she will reveal within her lifetime.

Mirjana believes that now is the time to share her story with the world through her auto-biography,  MY HEART WILL TRIUMPH. Each book sold benefits Mary’s Meals, a charity that feeds over a million children every day.

For more information about Mirjana’s new book, see www.MyHeartWillTriumph.com.  A limited number of copies will be available in the Center For Peace-West Bookstore.  Call 503-646-4435 for ordering information.