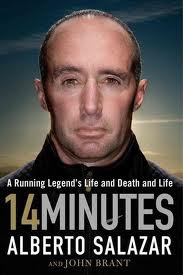 Alberto Salazar had a brief but brilliant career as one of the best U.S. distance runners, three times winning the New York Marathon and winning the 1982 Boston Marathon in an epic race with Dick Beardsley.

The University of Oregon graduate believes his uncompromising approach to running shortened his career and possibly caused the scarring on his heart that probably led to a near-fatal heart attack in 2007. After collapsing on the Nike campus, Salazar spent 14 minutes without a functioning heart.

Salazar, 53, used his near death as a springboard to his new book”14 Minutes: A Running Legend’s Life and Death and Life,” co-written by Portland author John Brant. Salazar is coach of the Nike Oregon Project, an elite distance running team that includes Galen Rupp and Mo Farah, Britain’s top distance runner.

Salazar recently talked about “14 Minutes.” His answers have been edited for brevity and clarity.

Q. Can you explain the title?

A. It’s called “14 Minutes” because the whole story emanates from that 14 minutes when my heart stopped. The book is about my spiritual journey. If you want to call it that. Everything that happens has a purpose. God has a plan for all of us; sometimes we don’t know what it is. we just have to keep searching. That’s the whole thing about faith. You never know for certain what life will bring, or necessarily what God will want you to do. It’s a never-ending process. Sometimes we’re going to muddle around and be confused. But there is always a reason.

Q. The spiritual part of your life obviously is very important. You tell the story of making a pilgrimage to Medjugorje, a Bosnian village where some believers say the Virgin Mary appeared to six children in 1981. Explain the importance of the trip for you.

A . Medjugorje for me was just a time of returning to the Catholic Church and returning to my commitment to Christ. I guess the No. 1 thing Medjugorje did was to illuminate that all my injuries and sicknesses and the fall from running success were again a part of God’s plan. I think my running had become so important to me that God at some point just said, “You know what? You’re getting too far out there. You’re forgetting about me.” And I look at my running now just like the heart attack. My running going poorly was a blessing. Because I was just becoming this guy who believed in himself and his running and had no time for God.

Q. While you were there, you write about how your rosary beads changed overnight from silver to gold. Do you think that happened because you believed, or did it happen so you would believe?

A . I think it was because I believed. The first couple days, we were waiting to see if it would happen. When it didn’t, I realized we shouldn’t be asking to be shown a miracle in order to believe. It’s like the story of St. Thomas, the one apostle who wasn’t there when Christ first appeared. He said, “I won’t believe it until I can put my finger in the holes in his hand and his side.” And the next time Jesus appeared Thomas was there, and he said: “My Lord, my God.” And Jesus said, “You believed because you saw. Blessed are those who believe without seeing.” And so I realized that anyone can believe in miracles you see. We weren’t looking for it to happen. But then it did. Ken Goe….The Sunday Oregonian April 8, 2012